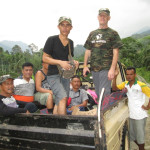 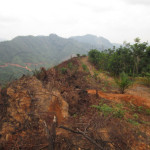 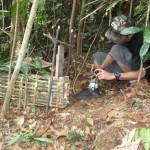 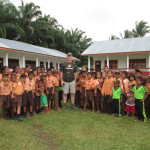 I departed London, to take my first visit to Sumatra, to meet up with a small team that are doing work in the forest area of Labuhan Batu / Labura districts. On arrival at Medan airport and a delayed flight by over nine hours, I met up with Heri Munthe, founder of Bukitbarisan Sumatran Tiger Rangers (BSTR) and a couple of his team.

We then made our way to Rantauprapat, having some food and meeting up with some forest rangers from the local area on the way, we arrived in Rantauprapat at around 3 oclock in the morning, getting some supplies on the way, then taking a further one and half hours to a village called Tanjung, were Heris mother lived and a couple more of his volunteers, also it was the starting point to go into the forest, were BSTR work. We had a couple of hours rest, sleeping on the floor at Heris mother’s house. After some noodles and tea for breakfast, we then made our way into the forest area by vehicle, we observed so many scarred parts of the forest, huge amount of palm oil, some farmed and others waiting to be.

After a few hours by vehicle, we were dropped off, part way up Hadabuan Hill, we were then to trek to the top and stay their overnight. One of the seven man team, was struggling half way up the hill and was taken down by another member of BSTR, it was steep, I also found it difficult, as I had not done this type of trekking for many years, and the weather was also humid. The forest is dense, we passed small waterfalls cascading down rock faces and we could hear many birds and some monkey calls. It took us about 4 hours to get to the top, once reaching the top, Heri, also put out a couple of camera traps on the trail close to our overnight camp area. The rest of his team, set up, camp area, making a lean to out of plastic sheets, another was getting their evening food ready, in this case, I had brought with me, some camping food pouches, which can be eaten hot or cold. Overnight, the forest was quiet, also next to my side of the sleeping area, I heard a sniffing noise, believe it was a pangolin, as, I looked, you could see a small animal moving off.

Next morning, we had some breakfast, then took camp down, Heri checked the camera trails, there was nothing captured on them. Heri was telling me, that there are many Tiger or Harimau as they are known locally in this forest area, if we could get some pictures on the camera traps, this would be the evidence we would need to help more. We then took a three hour trek down the hill, seeing some large trees that had fallen naturally, some had been chopped down by chainsaw. We also again could hear lots of different birds, monkeys, though difficult to see, as the canopy in thick. Whist waiting for the vehicle to pick us up, we found a wooden trap, set up, looked like it was to catch Pangolin or porcupine. This was the only one we found in my time in the forest area. The area, was also scarred from tree felling and a mechanical digger was about one kilometre away, making new tracks higher up in the forest.

Once we had met up with the vehicle, we then spent the rest of the day, driving around, talking with some villagers, passing a school. Then as we turned a corner, we observed a dead monkey on the roadside, it had been stoned to death, Heri shouted to some local people down the hill, if they knew anything, with no reply. I asked him to take the monkey at least a few metres into the forest. In the evening, we stopped by a river bed to sleep, after about 30 minutes the weather changed and there was a thunderstorm, the river level was rising fast and we had to move and spent the evening in a family’s house, sleeping on the floor.

Next day, we used the vehicle to get around, stopping at Sunut, a small village, Heri spoke to the village head, I took a walk around with one of his volunteers, there is a large school in the village, and we spoke briefly to teachers and took a few pictures. We then went with the village head and went on a river motor boat, which was very good way to get a different view of the forest area. After some lunch, we then used the vehicle to visit more areas of the forest. In the latter part of the afternoon, we made our way back to Tanjung, were we had started 3 days before, I had a hot body wash from buckets, then after some food and little rest, we then took a car overnight to Bukit Lawang, district Langkat.

We arrived in Bukit Lawang at 05.00 hrs and then took a hotel for a short time, till we could meet up with Heris friend Jungle Eddie, who could speak good English also. We had some breakfast, he then took us by scooters to Jungle Hill Bungalow hotel, a small, wooden building on a river, hillside in the forest. We were to stay here for two days, we trekked around the area a couple of times, we planted some trees via our donation on the hillside, also the next day, we met a group of local people, who are trying their best to make a difference environmentally. We also got to observe some rubber workers, taking their product to market, Jungle Eddie, made me aware that the market for rubber had fallen locally by about 40 percent recently. We also, observed two monkeys ,having a fight, we believe it was probably a territorial squabble, close to the hotel. Early next morning, we left the forest area, we took a car back to Medan, were I was to spend the night in a hotel, we had a short meeting at the hotel, with some local people, then next day, I returned to UK.

I had spent 6 days in the forest areas, meeting Heri and some of his team of volunteers, it was a worthwhile experience, and he has lots of knowledge and has been visiting the area, for around 20 years. He had shown me as much as possible, in the time possible. We had donated funds to purchase 5 extra new camera traps, to go with the two Heri already had. These were brought over by an Australian Ngo called Cee4life, a few weeks after my visit. These have been placed on tracks, hoping to get some pictures of Tiger, which we then can look to take funding further. We are presently, supporting BSTR, so that they can keep some of their team in the field on a more regular basis.